I was a foster failure for mom and dad in early 2010. I was the last to join the pack, which included their first rescue in Arizona, Ginny, and Mocha, who was originally from Utah. I was from a bad situation, and not fitting in well at the first foster home that I was assigned to, so one of the rescuers reached out to dad. The first foster home had a lot of other dogs that I was a bit of a bully to. I was on my best behavior when I first arrived with mom and dad, though, but I also really liked it here, and by the time I showed a bit more spunk, I'd been adopted and there was no giving me back. Ruff, ruff! ;-)

Ginny had been born in 2003 and adopted as a puppy from the local Human Society, only to be returned to the HS as a one year old, because the owners had just had a new baby and found Ginny to be aggressive. Mom and dad found her the day before she was to be euthanized, as the last (adult) dog left at an adoption event at Petsmart in December 2004. Ginny was mommy's girl! Ginny was the best behaved of the three of us (getting along with all dogs and people), but she had some serious separation anxiety. So, dad was on the lookout to rescue a German Shorthair Pointer (mom has no idea why he was breed specific), but it led to them finding Mocha through a Utah rescue. Mocha had been found wandering in the woods, and sick with pneumonia. It took nearly a month for the Utah rescue to be able to get her well, but mom and dad patiently waited, checked in on her, and offered to pay for the vet bill (but that was not allowed). Then Mocha was transported to Tucson, and from the moment she arrived at home, she bonded with Ginny. After that, mom and dad could leave Ginny and Mocha free to roam the house (with certain rooms closed off, and there were some minor disasters), while they ran errands, or were away at jobs. They attempted to have a neighbor watch Ginny and Mocha in 2008, while they took an overnight trip out-of-town, but luckily they weren't flying out, but driving, because within an hour after they had left, they got a call from the neighbors, saying Ginny had run off. They turned around and headed back to Tucson, with no regrets about missing out on the concert they had tickets for.

Unfortunately, when they arrived back in Tucson, Ginny was nowhere to be found. Dad had walked my sisters along a river wash walk, and thought that was where Ginny was likely to be, but she must have been so scared that she did not show herself when he walked the path, calling for her. For a week, mom and dad made put up flyers, took calls, went to shelters to see if Ginny had been taken there (even though she also was microchipped), and kept the backyard gate open, just in case Ginny came home during the night. On the morning of Mother's Day, a Sunday - of course, mom woke up super early and told dad that they needed to go drive. She had a feeling. It was around 5 a.m. and the particular street she told him to drive down was nearly deserted. They saw a shape moving along the rode, and it was Ginny! Dad crossed to the wrong side of the rode in his anxiety, parked and leapt out of the car. Mocha was in the backseat and nearly tried to follow him! Luckily, mom got into the driver's seat, drove the correct way down a side street, and parked legally, before getting out to try and find dad. He had followed Ginny and seen her go down into one of the entrances to the wash path. (In Tucson, when it is not monsoon season, or hasn't rained heavily, the river washes are dry and a place where a lot of wildlife hang out.). Mom and dad were devastated that they had not been able to get Ginny to come to them, nor could they figure out where she might be hiding. They brought Mocha back home, and cried. A few hours later, a neighbor came knocking on the door, saying they had seen Ginny in the neighborhood, and she was just now walking out toward a back street. Mom and dad were quick, but calmer this time, made a plan, and dad walked quietly down the street, while mom came around the other way in the car. Dad was able to stop Ginny and hold her. Then they brought her back home. They were ecstatic. After the initial excitement, and giving Ginny some much needed water and a little food, they took a good look at her and then took her to the emergency vet. She was doing pretty well after a week on her own, but had a big hole in her but from what might have been a javelina, had stuck her. She recovered though, and from that day, until Ginny passed away in December 2018, none of use was ever without either mom or dad with us overnight. They never went out-of-town together, and refused to leave us with anyone else. Mom worked from home, so she was able to be with us whenever dad traveled for business, and when mom traveled for fun or to see family, dad was here, and even worked from home to be with us during the days as much as possible. We lost Mocha to cancer in April 2017. That anniversary is coming up soon, and it is going to be a tough day. Mom also lost her own mom to cancer last July (2018), so there are now more anniversaries of loss to commemorate, than birthdays here in this house.


That is the reason mom wanted to start this blog. She'd had @dogkismet on Instagram for awhile, and has always supported and encouraged dog (and any animal, really, but dad doesn't like cats) rescue. She is hoping that the stories, and eventual illustrations she will add here, will aid in fundraising in support of animal rescue. She has tried this before with Donuts for Doggies, which were supposed to be felt donuts sold to raise money for Dog rescue, but she wasn't able to expand that idea in the way that she wanted to, and thought it would end up being confusing as the donuts were not edible for dogs (or humans). So for now, she will share our pack stories, and add illustrations to be enjoyed by any dog or animal lover.

I was pretty happy with my sisters, but just like in that first foster home, for some reason besides Ginny and Mocha, I don't seem to care much to share my home with other dogs, so mom and dad can't bring in any fosters or other rescued dogs at the moment. Ginny was 15 years old when she passed away, and even though Mocha's age was uncertain, it was estimated that she was approximately 15 years old (mom and dad adopted her in 2006) when she passed away. I, Bella, am going to be 13 years old! I don't mind having mom and dad to myself for now, but I know that they want to continue to help in dog rescue, so I encourage mom finding a different avenue than just taking in more pups. She works from home, so I keep her company while she does her creative work.


Thanks for reading. Of course, this is mom's interpretation of what she hopes is going through my mind, so she'll probably switch to the blog being in her own voice, so as to make more sense when she tells stories of Ginny and Mocha from the years before I joined the family. 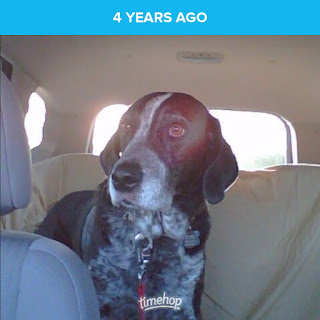